One of the world’s biggest computer games is helping children in Glasgow learn about the role Maryhill played in the First World War. ‘Building the Barracks’ is a free download for Minecraft, allowing gamers to experience what it was like to live and work in the army base back in 1914.

The game, told through the eyes of a soldier, features present-day landmarks and also buildings found on the army barracks, including the officers’ mess, cook house, hospital and quartermaster’s store.

The barracks were once home to the Highlands Light Infantry and the Royal Highland Fusiliers before being decommissioned in the 1960s. It’s now home to Cube Housing Association's Wyndford estate.

Cube in partnership with Wheatley Foundation are supporting the game as part of a wider project, funded by the National Lottery Heritage Fund, to explore the history of the area.

Sophie Greene, 9, (pictured left) said: “I walked right to the edge of the barracks in Minecraft and I could see houses that look just like mine. It was amazing. You get to see the homes the way they were. I could even see my home in the game. I’ll play it again.”

Sammy O’Neill, 7, (pictured right) added: “I like pretending to be a soldier and walking around the houses.”

The heritage project also features photos and an exhibition looking back at the role the barracks played in shaping Maryhill.

Cube Managing Director David MacKenzie said: “This part of Maryhill has been transformed with massive investment in the homes and community in recent years, but we didn’t want to forget about its important history.

“The free game brings the story of the Wyndford Barracks to life and encourages young people to learn about the history of the estate in a fun and interactive way.”

Ríona McMorrow, Acting Head of The National Lottery Heritage Fund Scotland, said: “The impact of the First World War was far reaching, touching every corner of the UK.

“With our grants programmes, we are enabling even more communities like those involved in Wyndford People’s History Project to explore the continuing legacy of this conflict and help local young people in particular to broaden their understanding of how it has shaped our modern world.”

Minecraft is the second biggest-selling computer game of all time. Players create virtual worlds using 3D building blocks. It has sold over 154 million copies since it was launched in 2011.

‘Building the Barracks’ can be played at the Click & Connect centre in the nearby Maryhill Hub.

Click & Connect centres help people in Wheatley communities get online for free and find work, get qualifications and keep up to date with welfare reforms.

The game is free for people who have Minecraft on their PC, tablet or smart phone.

How to add Minecraft to your device: 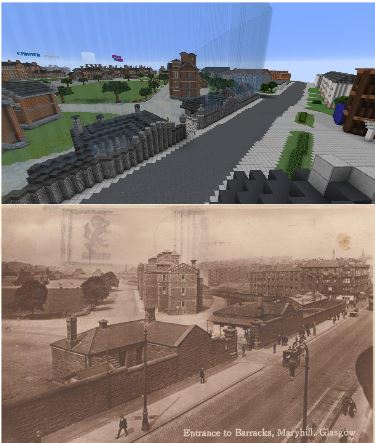 Above (l to r): Cube Board member Bill Carroll joins Sammy O’Neill, Sophie Greene and Cube's David Mackenzie at the launch of ‘Building the Barracks’ at Maryhill Hub.

Minecraft how to video