Still Game actor Paul Riley, who plays bunnet-wearing Winston Ingram, has given a Glasgow high-rise the ultimate seal of approval. 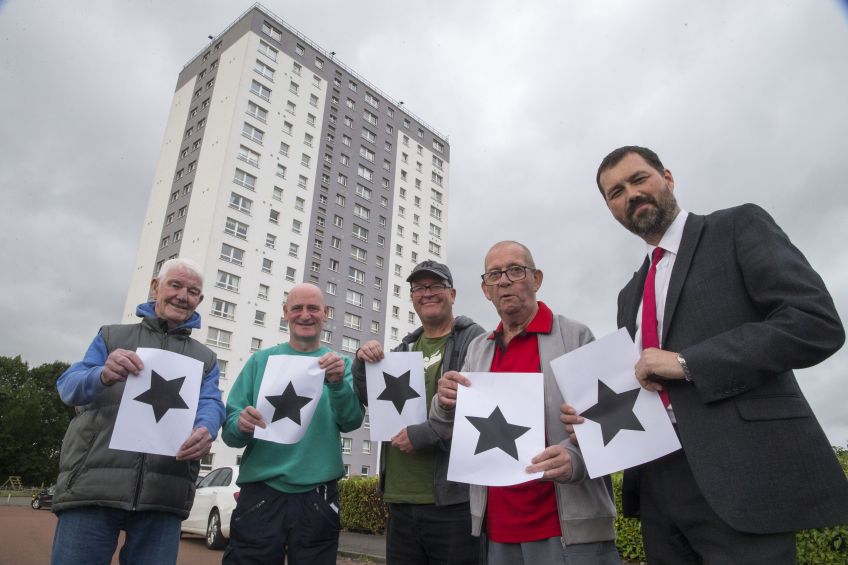 Cube Housing Association, along with the other partners in Wheatley Group, is working closely with Keep Scotland Beautiful to keep communities clean and green.

And Collina Street in Maryhill – which doubles as Osprey Heights in the BBC show – rated highly for cleanliness inside and out, excellent waste collection and recycling, and good communication between staff and tenants.

Paul took time out from filming the next series of Still Game to meet tenants and staff and help mark the result from Keep Scotland Beautiful.

He said: “We have filmed in the area for over 16 years and have always had great co-operation from Cube tenants and staff.

“People can’t do enough for you. The block here is absolutely spotless and it’s clear that staff take great pride in their work.

“The investment is clear for everyone to see. The buildings are so much fresher and easier on the eye.”

Tenant Julie Davies, who’s lived in Collina Street for 48 years, added: “I was one of the first to move in here in 1971.

“I’ve seen some changes in that time but the block looks great and the staff do a great job.

“The place is in great condition. I’m very happy with the neighbourhood. I wouldn’t leave here.”

Keep Scotland Beautiful has its own National Award for Environmental Excellence and has been working with staff and tenants to assess and grade Cube neighbourhoods.

They look at things like foyers and closes, back courts and open spaces – as well as issues such as graffiti and dog-fouling – and grade a community three, four or five-star.

Keep Scotland Beautiful’s Colin Hegarty said: “We know clean, green spaces and living environments have a positive impact on the health and wellbeing of residents and the wider community.

“We are delighted to award Collina Street multi with the five-star National Award for Environmental Excellence, highlighting the great work done by Cube staff and residents."

Cube Director David MacKenzie added: “We want to create communities people are proud to live in and our partnership with Keep Scotland Beautiful is helping us do that.

“We were delighted to invite Paul along to meet tenants and staff.”

Collina Street was built in 1967. It is 18 storeys high and contains 112 flats, a mix of one and two-bedroom homes.