New GHA homes in the south of Glasgow are providing modern spacious places to live – and bringing families closer together at the same time. Tenants who have just moved into the 47 new energy-efficient flats in Pollokshaws Road say they are already saving on their fuel bills – and being able to sit round the kitchen table brings them closer together.

The Pollokshaws area has been earmarked as a priority for regeneration by Transforming Communities: Glasgow (TC:G) a strategic partnership between the Scottish Government, Glasgow City Council and GHA.

Councillor Kenny McLean, Glasgow City Council housing convener, joined tenants and staff from GHA and Wheatley Group – GHA’s parent organisation – as well as local elected members and representatives from the Scottish Government, the city council, and the contractor, McTaggarts to mark the completion of the new homes.

Tenant Mpanga Katongo, moved into Pollokshaws Road with his wife and three children earlier this year. Mpanga, a security officer, said: “We’re very happy here. Our new home is nice and warm. I hardly have to put the heating on and I’m already saving money on my bills.

"It’s very convenient too, very close to my kids’ school, and the neighbours are nice too. The whole house is much bigger. We are able to fit a dining table in the kitchen and we eat together. It’s brought the whole family closer together.”

The development in Pollokshaws Road is made up of 47 flats, ranging from one to four bedrooms, with five specially adapted for wheelchair users.

Councillor Kenny McLean, City Convener for Neighbourhoods, Housing and Public Realm, said: “It is great to see the impact that these new homes in Pollokshaws are making on people’s lives. The importance of good housing in the quality of people’s lives cannot be overstated, and we are pleased to work with our partners to deliver such projects all across Glasgow.”

The £4.6m development in Pollokshaws Road – which included a Scottish Government grant of £2.15m – was built by contractors McTaggarts Construction.

Gary Climson, Managing Director of McTaggart Construction, said: “Our relationship with GHA was a real partnership and we’re delighted that the feedback is so positive.”

The new GHA homes are the latest stage in the wider regeneration of the Pollokshaws area.Loretto Housing – GHA’s partners in Wheatley – will begin work on 42 new homes in Shawbridge Street before the end of the year.

Work will also start next summer on another 137 new homes for private sale by Urban Union south of the White Cart river.

As well as the new homes in Pollokshaws Road, GHA recently opened 85 new homes – along with 20 mid-market rent homes let and managed by GHA’s partners Lowther Homes – on the site of the former Govan Tram Depot in Brand Street.

Work is well underway on 152 GHA flats at Hinshelwood Drive in Ibrox and on 130 new GHA homes at Dougrie Drive, Castlemilk. 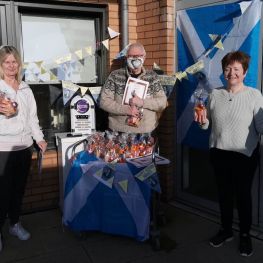 Staff at Wheatley Care’s Fullarton Service in Glasgow have found new ways to make sure the people we work for felt festive this Burns Night.

We are doing everything we can to provide as wide a range of services as we can during the new national lockdown introduced on 5 January, 2021.

Tenants choose how to spend £5000 on improving their area

Tenants in a West Lothian community are being given the chance to decide how a £5000 fund is spent in their area.