GHA builds 46 new affordable homes in the heart of Glasgow

Glasgow Housing Association (GHA) has started work on a second development of flats for affordable rent in Glasgow’s Merchant City. 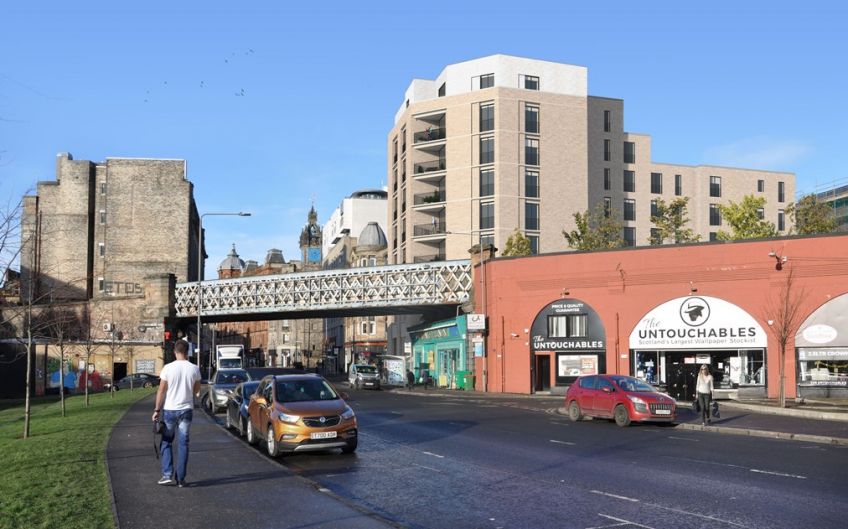 Following the successful completion earlier this year of the historic Bell Street Stables, home to a range of 52 one and two-bedroom flats, a further 46 apartments for mid-market rent are being built in nearby Watson Street.

The £9.1m project, which will provide four wheelchair-standard flats and a commercial space on the ground floor looking on to Watson Street and the Gallowgate, is supported by £4.2m of grant from Glasgow City Council. The block, built on a derelict brownfield site will be stepped in design with seven, eight and nine storeys to fit in with nearby buildings.

Construction of the modern, energy-efficient flats is being led by Glasgow-based contractor CCG (Scotland) Ltd. Once completed, the homes will be managed by GHA’s Wheatley Group partner, Lowther Homes.

Wheatley’s Director of Development David Fletcher said: “This is an exciting new development which will offer people more opportunities to rent a quality, affordable flat in a fantastic part of Glasgow. Our mid-market rent flats in nearby Bell Street proved very popular with young professionals, particularly those not able to get on the property ladder quite yet. I’m sure these flats in Watson Street will be snapped up too when they are finished later next year.”

CCG Managing Director, David Wylie, said: “Watson Street is a continuation of the great work performed between the Wheatley Group and CCG in creating quality, energy efficient homes. In an area of the city that is in high demand for housing, the development will go a long way to providing people with a great place to live in the heart of Glasgow’s city centre. We look forward to bringing this development forward with our Wheatley partners, along with others, as we move into the New Year.”

As part of the contract, CCG has committed to providing new jobs, apprenticeships and work placements as well as providing curriculum support to local colleges and donating to community-based projects.

Councillor Kenny McLean, City Convener for Neighbourhoods, Housing and Public Realm at Glasgow City Council, said: “It is exciting to see the start of work on more housing in the city centre with these new affordable homes in the Merchant City. We are delighted to be a partner in this development, which offers the chance for people and families to live in the city centre. This is yet another example of the council supporting the building of high-quality affordable housing in Glasgow.”